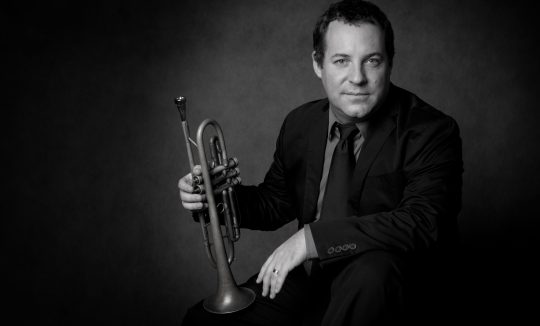 Dan Quigley’s early childhood was enriched by the presence of jazz legends Freddie Hubbard, Woody Shaw, Joe Henderson, John Scofield, Randy Brecker and many more. His father Greg Quigley also plays the trumpet and toured these jazz greats to Australia for concerts and workshops while Dan was still an infant.

Dan’s trumpet playing displays a rich heritage of the jazz tradition. He has been a professional trumpet player since he was 17 and since has performed with some of Australia’s biggest names including James Morrison, Dale Barlow, Tina Arena, Anthony Warlow, amongst many more.

It wasn’t until his early 20′s did the impact of early exposure and connection to jazz legends spark the passion to pursue a career as a jazz musician, educator and advocate. 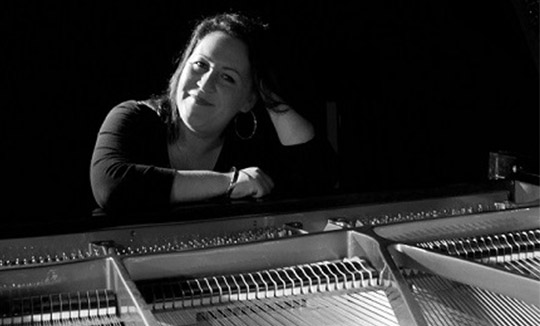 Paula has been a passionate and active music educator since 1992, and is a recognised Pianist for sessions and performances. Her versatility as a performer has seen her perform and record in big bands, alongside rock stars, corporate bands and in her much loved set up, Jazz Duo. At Jazz Music Institute, Paula teaches and coordinates the subject areas of: Jazz Materials, Aural and Analysis, Ensembles, Piano skills (second study), and Concert Performance Practice. 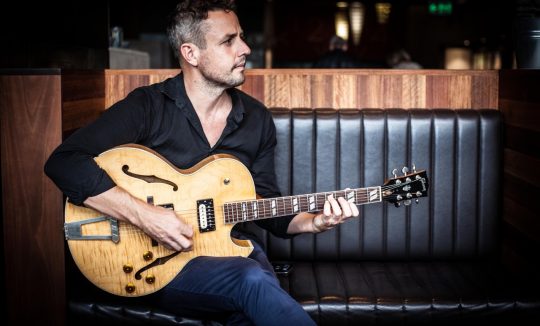 Ben Hauptmann is a prestigious Jazz guitarist based Sydney, Australia. Winner of the 2010 Freedman Jazz Fellowship and 2nd place winner in the National Jazz Awards at the Wangaratta Festival of Jazz 2007. Ben has shared the stage with a diverse range of artists including Mavis Staples, Joss Stone, Gurrumul Yunupingu, Donny Benet, Jack Ladder, Bandaluzia Flamenco, Katie Noonan, Lior, Bluejuice, Micheline Van Hautem, Justine Clarke, James Morrison and Tal Wilkenfeld. Internationally he has performed throughout the UK, France, USA, Indonesia, China, Japan, Singapore, Belgium, Turkey, The Netherlands and New Zealand as well as many major Australian music festivals including The Big Day Out, Wangaratta Festival of Jazz, Pyramid Rock Festival, Homebake, Woodford Folk Festival, Splendor In The Grass, Port Fairy Folk Festival, Apollo Bay Music Festival and the Adelaide International Guitar Festival. Ben wrote the ‘Lead Work’ column for The Australian Guitar Magazine for over 10 years and has taught music at VCA, Monash University and UNSW. Ben has contributed to over thirty recordings including the 2015 ARIA winning ’The Gospel Album’ by Gurrumul Yunupingu, he has released two albums under his own name and co-produced multiple others. 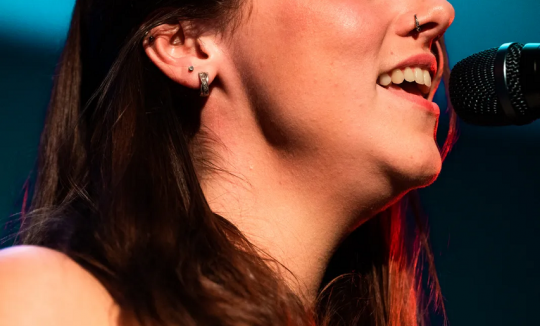 Charlotte Mclean is emerging as one of Australia’s most captivating and original vocalists. Possessed of a velvety-smooth voice, she produces her own addictive style and her original tunes have garnered critical and popular acclaim. Charlotte’s exemplary skills as an improviser allow her to put a fresh spin on classic jazz repertoire, and she sings with honesty, strength and a unique combination of contemporary musical influences.

Charlotte has had a passion for writing music and performing from an early age, and was delighted to release her debut album Knocking Bird in July 2014 with acclaimed jazz guitarist Toby Wren. In June of 2020 she will be releasing her second originals album Magnolia. Charlotte wrote, co-produced and co-arranged Magnolia and also plays piano throughout the album.

Charlotte has been singing professionally for almost fifteen years and was the winner of the June Bronhill scholarship for vocal excellence when she was seventeen. She frequently performs with many of Australia’s elite jazz musicians such as James Sherlock, Bruce Woodward, James Sandon, Paul Hudson, David Sanders, Steve Russell, Brendan Clarke, John Hoffman and Toby Wren to name a few. 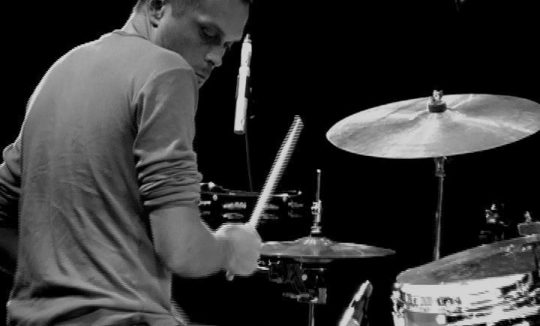 David has been involved in virtually every aspect of the music industry and music education and has gained the reputation as one of the most versatile and in-demand drummers and drum teachers in Australia.

Dave divides his time between national touring, recording and teaching drum set at the Jazz Music Institute, Brisbane. As a tertiary educator David has become recognised as one of Australia’s top drum set teachers and his students are some of the most in demand drummers in the Australian music industry. Dave has been featured in Drumscene magazine, recognised for both his performance and educational pursuits.

Dave maintains a very busy performance schedule and has performed in many and varied situations both across Australia and internationally. David’s ability to cross the boundaries of genre and style has made him an asset to many acts within the music industry both as live performer and experienced studio musician. Sensitive to the music and musicians around him Dave is just as happy to sit back and play swinging brushes as he is to smash thru a high volume, high energy show. 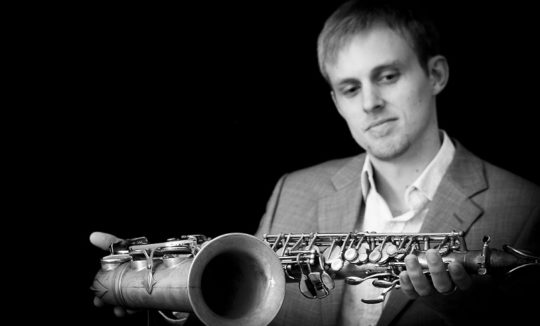 Joshua Hatcher is a saxophonist and composer with a style based firmly in the jazz tradition. He was one of the 10 finalists in the 2016 National Jazz Awards at the Wangaratta Jazz and Blues Festival and has performed with some of Australia’s finest musicians including Dale Barlow, Andrew Dickeson, Warwick Alder, Ben Hauptmann and Steve Newcomb.
His album “Now and Then” (2015) marks his debut recording as a leader and features original compositions for his quintet. 2 selections from this recording (Forgotten Languages, The Room Next Door) were finalists in the Jazz category at the 2016 Queensland Music Awards.
In 2016 he was named Composer-in-Residence for the West Australian Youth Jazz Orchestra (WAYJO) and premiered some of his new large ensemble compositions at the Perth International Jazz Festival. He is also Musical Director for the Enthusiastic Musician’s Orchestra and has had his compositions and arrangements recorded on their 2 most recent albums.
Since 2012 he has been a lecturer at Brisbane’s Jazz Music Institute teaching saxophone, improvisation, theory and ensemble playing. He is also regularly engaged as a big band clinician and guest director by schools and community organisations. He is currently undertaking a Master of Music (Research) at the Queensland Conservatorium of Music investigating the intersection of compositional and improvisational practices. 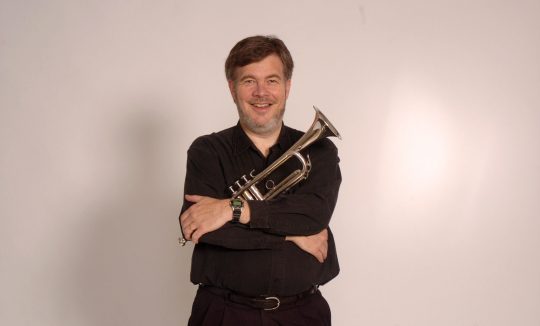 Dr. McWilliams has been published in a number of professional publications including the Journal of Band Research, Teaching Music Through Performance in Band, and is a published composer/arranger with Alfred’s Music. In early 2015 he relocated to Brisbane, and currently works for Yamaha Music Australia as an Educational Outreach Clinician and freelances as a musician, educator, conductor, adjudicator, and composer/arranger. 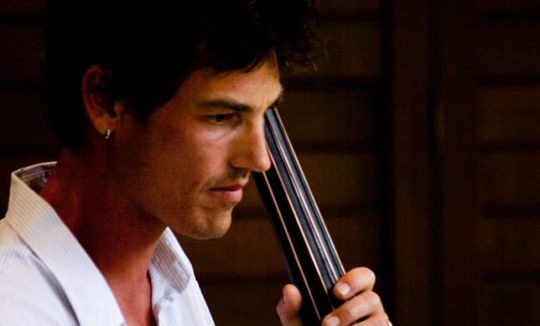 Shaw has performed nationally and internationally at many major venues and festivals. He has recorded on more than 40 albums with various artists. 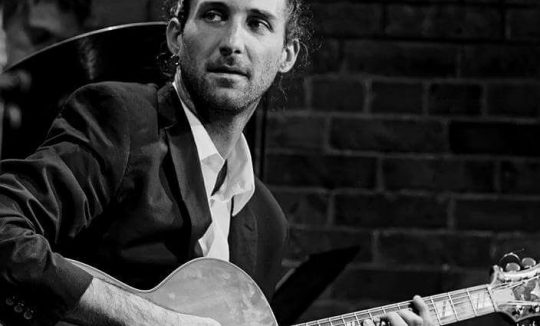 Trav has been studying and playing the guitar for over 20 years. He is a prolific composer and multi-instrumentalist, having written and arranged music for a variety of circumstances including film music, video game sound tracks, small and large string ensembles, big band, and choir.

Trav is in high demand as a session musician, having recently been hired in the studio to record with the 2017 and 2018 winners of the Carrol Lloyd Award (for emerging female singer-songwriters), and has played in various contemporary outfits at major music festivals around the country, such as the “Brisbane International Jazz Festival”, “Broadbeach Jazz Festival”, “Melbourne Jazz Festival”, “Woodford Folk Festival” and “Big Day Out”. Travis has also played alongside reputable Australian Jazz musicians such as James Morrison, John Morrison, Craig Scott, and Jonathon Zwartz.

Graduating in 2013 from the Jazz Music Institute with a Bachelor of Music (BMus), Trav studied guitar under both Bruce Woodward and Ben Hauptmann, achieving academic awards in all 3 years and in 2015, receiving a nomination for the Freedman Jazz Fellowship. Trav worked for 5 years at the Brisbane Music Studio teaching guitar and directing an ensemble program, has developed a new performance module as part of Griffith University’s Bachelor of Popular Music, which he now runs both at the Gold Coast and South Bank Campuses, and has been teaching guitar and ensemble classes at JMI for 2 years. 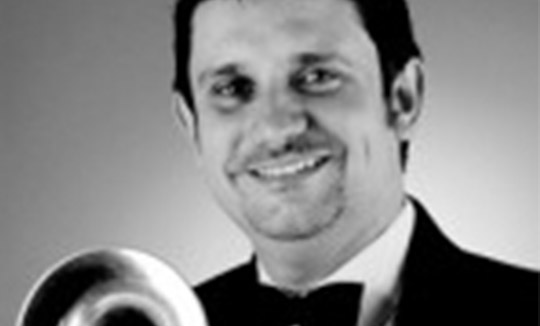 Brad Esbensen is a Brisbane based trumpet player, arranger, composer, copyist and educator. He has worked in backing bands for artists including Kenny Rogers, James Morrison, Grace Knight, Max Miller and many others. He is currently working as Musical Director with Herb Armstrong and the Royal Street Krewe, performing a show paying tribute to the music of New Orleans, as well as being Musical Director of the Brisbane Big Band which has been the resident big band for the Brisbane Jazz Club since 1974. He also works regularly with local bands including Decahedron (a 10-piece jazz group), Jeff Usher Band, Swing Chronicles, Brisbane Contemporary Jazz Orchestra, Glenn Miller Tribute Band and the Queensland Pops Orchestra.
His arrangements and compositions have featured regularly as test pieces. Many of his compositions and arrangements have been performed with a variety of groups including the Australian All Star Youth Big Band, Queensland Youth Orchestra Big Band, Brisbane All Star Youth Big Band and the Queensland Pops Orchestra. He has been engaged as a copyist by the Queensland Symphony Orchestra and various local and touring shows. He was the recipient of first place in the 1994 Perth Jazz Orchestra Composition Awards with an original arrangement of “There Will Never Be Another You”.
Brad also holds an Associate in Composition from the Australian Society of Musicology and Composition and a Diploma of Music Technology from the University of Newcastle. 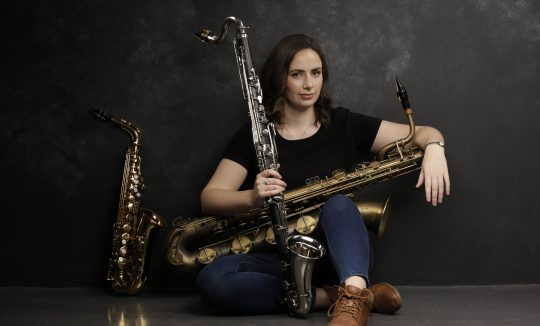 Bec Scolnik is a Brisbane based saxophonist and educator. As a baritone saxophone specialist, Bec has a passion for big band and arranging, and has performed in ensembles led by Dave Panichi, Judy Bailey, Andrew Robertson and more. She received a grant with South Coast Big Band in 2020 to arrange and record a version of ‘Fascinating Rhythm’, and is an orchestrator for large scale arena shows. Bec has performed extensively in musical theatre and enjoys doubling on all woodwind instruments.
In 2019 Bec completed her BMus (Jazz Performance) at Sydney Conservatorium of Music, where she studied with Col Loughnan and David Theak. Her performance experience ranges from folk groups to straight ahead jazz, and modern ensembles to New Orleans brass band. Bec now teaches privately on Brisbane’s northside and directs two ensembles at Glasshouse Christian College in Beerwah. 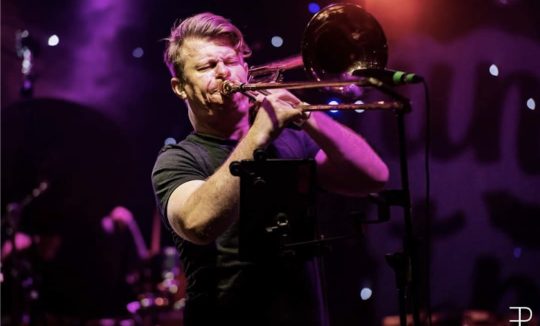 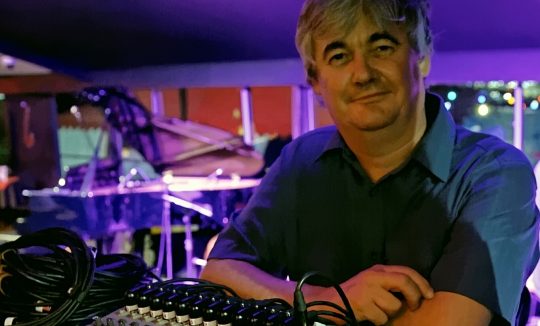 Mark Smith has spent his whole working career, close to thirty years, working as a sound technician and engineer. He is passionate about sound quality and importantly, artist comfort and satisfaction. Whether in a live performance or a recording situation Mark believes that providing a comfortable environment for the artist will give the best performance or recording outcome for them.

Mark’s skills and interests in music are wide and varied covering genres as diverse as classical, rock, folk and jazz. Mark has run a mobile sound business, Real Productions, since 1996. He has a wealth of experience including managing the recording projects of numerous artists from solo concert pianists to large orchestras – and everything in between.

In the past five years Mark has mentored a number of students through workplace placements for the School of Audio Engineering. In recent times he was invited to be a guest lecturer at the Queensland Conservatorium and a course lecturer in Music Technology at the Jazz Music Institute, Brisbane. 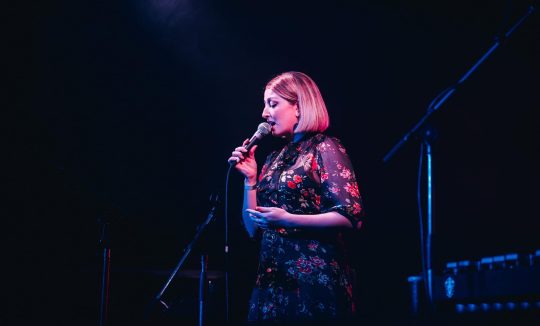 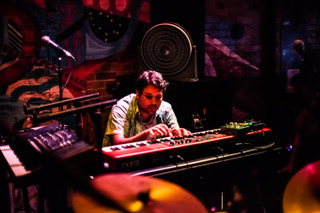