For this educational blog, I’m going to discuss a simple but effective musical concept to instantly add some interest to your ideas as an improviser – a pivot. To explain what a pivot is, let’s take a look at a normal Bb dominant 7th arpeggio in root position, ascending.

If you’re a new student of jazz (or a musician of any level), you will have undoubtedly used this sound. There’s nothing wrong with this sound; this sound is fine. However, as improvisors we want to expand our range of expression by drawing on many different ideas and sounds. This will help us in becoming more effective musical communicators.

So… what is a pivot?

A pivot is when you rearrange the notes of an arpeggio in a particular way so as to give it a different shape.

If we take our Bb7 arpeggio ascending from the root and pivot it down we’ll play the same notes in the same order except instead of ascending the entire time the 3rd, 5th, and 7th will be displaced down an octave (still appearing in the same order). The root will remain unchanged.

Note: You can also take a descending arpeggio and pivot it up by displacing the notes appearing after the first note up an octave.

As you can hear, this gives our Bb7 arpeggio a bit more interest. We’ve changed the contour of the line. (This idea of thinking about contours is something we’ll explore further in subsequent posts).

If you look at the line the arpeggio pivoted down makes, you’ll see it starts high, immediately jumps down to the 3rd of the arpeggio below the root, then makes its way back up the rest of the arpeggio in the direction it came… almost folding back in on itself. This sort of winding sound can give the impression that there’s more going on here than a regular single-direction arpeggio.

Once you have this down, you can start to work out the different inversions of the arpeggio and use the same type of pivot.

Here’s an example of using the first inversion of a Bb7 arpeggio:

And then a pivot down using the 1st inversion:

And here’s an example of using the second inversion of a Bb7 arpeggio:

And then a pivot down using the 2nd inversion:

A great way to start incorporating these ideas into your playing would be to try practising a pivot over the blues. I’d suggest starting with a basic I-IV-V blues.

To me these pivots could also sound like the melody of a blues. Here’s an example of how you can use different pivot permutations over a blues progression to make a blues melody.

As you can see, there are many different permutations of a pivot down that create different and interesting sounds and contours.

If you work through all these permutations through a blues progression, eventually you’ll start becoming more confident with them and be able to use them more musically.

From here you can try to incorporate these ideas into your playing more naturally.

To read other educational blogs on our website written by our awesome JMI Faculty, head here. 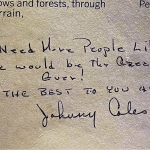 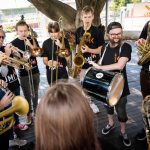