by Travis Jenkins – lecturer at JMI

Last week we looked at the importance of triads and how to effectively use them in constructing melodies through major harmony.  For a recap, check out Part I of Working with Triads.

The more commonly used modes of melodic minor would be (all based off a C root):

Here are some of the more useful triads from each mode that will highlight the upper structures/extensions.

The diminished scales have an interesting array of triadic possibilities being that they are equally symmetrical in nature, meaning that you can find both major and minor triads repeated at even intervallic increments.

The “1 : ½” diminished scale (whole step : half step) corresponds melodically to a diminished 7 chord:

The chord tones being 1 b3 b5 bb7 and the extensions being 9 11 b13 b15 (major 7).
There are 4 major triads and 4 minor triads to be found within both diminished scales, as they are both identical in terms of intervallic structure (though stress different tonics).

The C whole/half scale contains B, D, F, Ab, Bmi, Dmi, Fmi and Abmi triads, though I find the major ones to produce stronger melodic potential.

B triad = 7 b3 b5 (makes for a beautiful voicing and great melodic potential as it is the major triad a half step below the root)  See fig 5a.

The major triads to be found within this harmonic system are C, Eb, Gb and A.  (There are obviously many more but I’ll just focus on some of them).

Other noteworthy mentions are the symmetrical augmented scale:  which moves in repeated increments of a minor 3rd followed by a minor 2nd, and is built around 3 major triads, all major 3rds apart.

As well as the use of triad pairs in something as simple as say the harmonic minor scale:
C, D, Eb, F, G, Ab, B.  Containing both a G and an Ab major triad, which being separated by a minor second, produce some really interesting melodic applications.   See fig6.

But we can expand upon triad pairs in another article.  Be sure to expand upon each individual concept.  Obviously the triad practice exercises are only for C major mode series and can be applied to any scale in any key, and there are virtually limitless combinations of patterns that you can come up with to practice.  In fact, it would be more beneficial to yourself to find your own ways through this material as that will help to develop your own personalized musical vocabulary.  When your transcribing next, see if you identify the uses of triads in other people playing! 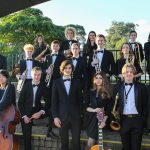 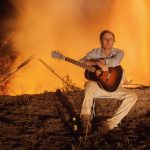